Steak is the most primal thing I know… It was the first thing the caveman made when he learned roasted meat is tastier than raw one. This time I grilled it the simplest way, and I want to share with you my four essential rules for a great steak!

So, rule number 1 (and I mean, number ONE) – it all starts with the right meat. Choosing the right cut, the right thickness is the very basics of a good steak. So here’s my list of most favorite cuts. The 3-rd place belongs to a rib eye. Yes yes, despite being the most popular cut for steaks, there are cuts much more interesting and appealing to me than this. 2-nd place – the sirloin. I love my steaks done to a medium-rear, and that’s the best recommended doneness degree for a sirloin steak. Of course, the New York strip goes along as well – it’s just a sirloin on a bone. Then the 1-st place – rump. Yep. I love the juiciness and the intense meaty taste of the rump steak, and it’s at its best when done to medium rear. Try it, and you’ll understand why rump is often referred as “rib eye for advanced carnivores” :). I intentionally did not mention the tenderloin. Being the most noble and expensive cut, it still won’t hit my list of steak cuts, and that’s for one single reason – I will always prefer this cut for dishes like tartar or carpaccio, where I can underline even more how tender and delicate is the taste and the texture of this cut.

Now, let’s not forget the thickness… A good steak is always about 1 1/2 ” (4 cm) thick, and that allows you to control it’s doneness much better.

Rule number 2 – do not interfere with mother nature. Seriously, steak is all about the taste of the meat. Why, in the world, would you want to mask its taste with marinades, spice rubs and glazes? Plain and simple – coarse or sea salt, freshly ground black pepper, extra virgin olive oil. That’s it! Trust me, nothing else is needed.

Rule number 3 – never grill your steak straight from the refrigerator. Let it rest in room temperature for at least 45 minutes. It’ll allow you to avoid a situation when the steak is charred on the outside, but still raw in the middle.

Rule number 4 – remember that a steak should be flipped only once during the grilling time. Don’t flip it all the time, don’t move it unless you have no choice (flare ups, for example). Let it sit on the grill grates until you see the tiny blood drops on the top side of the steak. That’s your ultimate sign to flip the steak over. Once flipped – have it on fire for another 5-6 minutes, then take it off, place it on a plate or a cutting board and let it rest for 10 minutes, loosely covered with foil.

That’s pretty much it! Now let’s try those rules on this sirloin steak, which I decided to serve with some grilled cherry tomatoes. 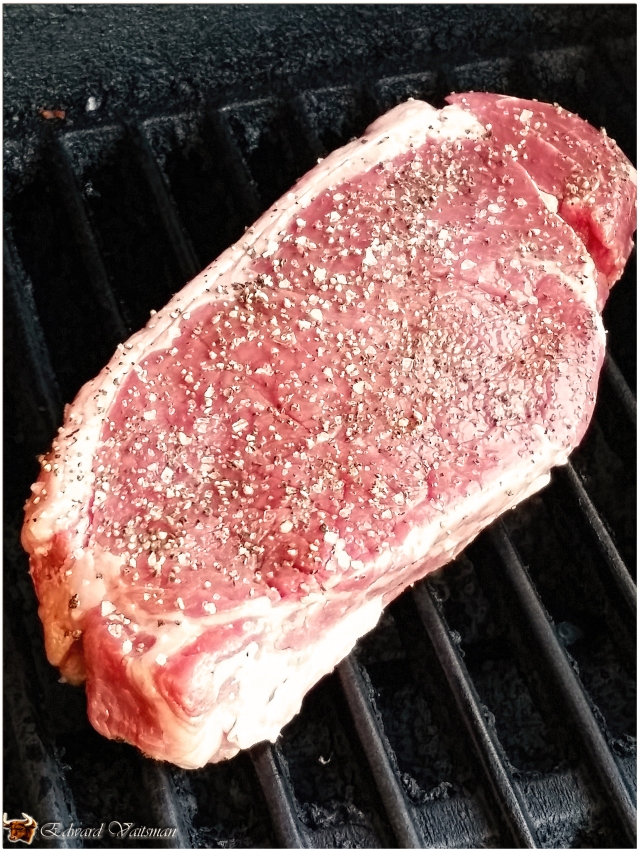 Ok! 13 minutes later, flipped once half way through the grilling time, steak goes off, for a 10 minute rest covered with foil… Meanwhile – cherry tomatoes go on the grill, 3-4 minutes, just to blister the skins…

Ain’t it a carnivore’s heaven? 🙂

4 comments on “Sirloin steak with grilled cherry tomatoes – my essential rules for a steak success!”

This site uses Akismet to reduce spam. Learn how your comment data is processed.

Follow Blood, Fire and the Pillars of Smoke on WordPress.com